When purchasing cheap chicken, is it really only you that pays? Americans eat massive amounts of chicken every single day. Chicken today is the cheapest meat, which obligates us to purchase more. We tend to not grasps this idea that mass-produced chicken, although cheaper, tends to be worse not only for us but for the chickens and our environment.

The low prices of supermarket chicken come from treating chickens poorly and not feeding them the proper foods. Tens of billions of animals worldwide are crammed into confined animal feeding operations (CAFO), where they are tortured in crowded, unhealthy, unsanitary, and cruel conditions.

From a nutritional standpoint, most people are unaware that these cheap CAFO foods are very different than animals raised on pasture. While they may be inexpensive, there are significant hidden costs associated with this kind of food production.

A typical poultry CAFO holds at least 30,000 chickens or more. These animals typically get fed genetically engineered corn and soybeans which is not what their normal diet should be. Grass fed chickens are much healthier than grain-fed chickens.

It has been found that it’s virtually impossible to mass-produce clean, safe and nutritious foods at low prices. Not only is this cheap mass-production bad for the chickens, but it’s also unhealthy for the people who are consuming the meat.

When the chickens get fed poorly and have an unnatural diet, they routinely are fed antibiotics. These antibiotics fed to animals pose a direct threat to human health and potentially contaminate the environment.

CAFOs tend to produce massive amounts of waste that pollutes the ecosystem. The smells that they produce become terrible for people near them and they tend to find lots of unwanted flies, mice, rats and intestinal parasites.

The chicken may taste good, but next time you want to buy chicken, find out where it came from. Chicken from a grass-fed pasture is not only better for your health, but also better for the environment.

For more information on the hidden costs of cheap chicken from the experts at BP Farms please contact us here or call us directly at 734.344.1208. 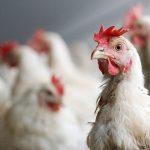